Are we sailing a toy boat? 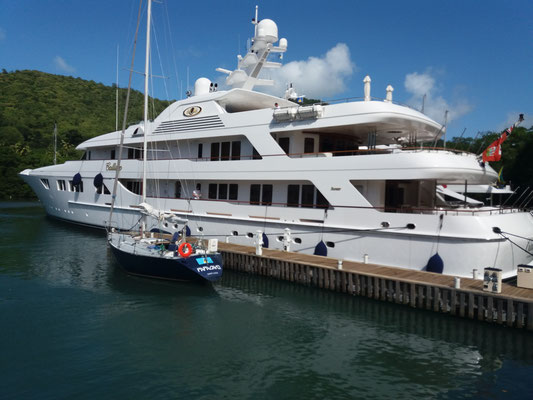 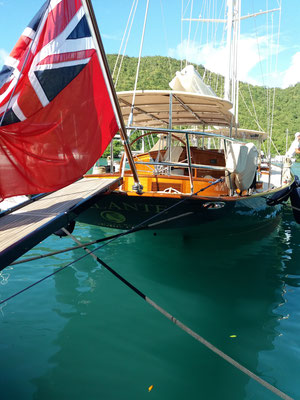 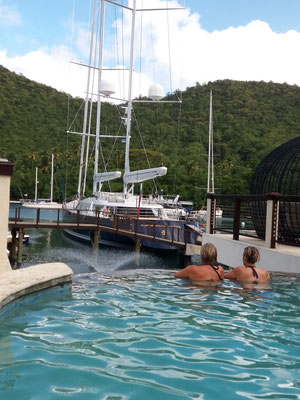 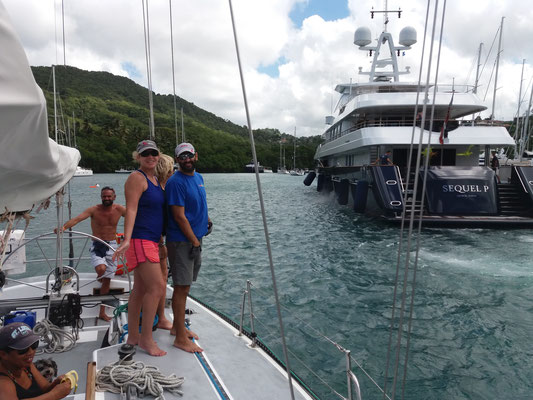 I looked up to the top of our mast. It didn’t even reach up to the first spreader on the superyacht docked next to Papagayo. The boom was almost as big as our entire boat. I felt as if I was sitting on a toy boat.

It was a late Saturday afternoon and we had decided to come down to Marigot Bay for the evening. A relaxing sail, a bite to eat, some rest and a sail back the following morning. The sail down was indeed relaxing, a comfortable beam reach along the coast of St Lucia as the sun was heading toward the horizon. It didn’t really cross our minds that being January the marina may be a little busy. We radioed in to be told that there was no space on either dock or mooring ball. We entered into the sheltered bay nonetheless and one of the marina tenders came out to greet us. We smiling faces and gentle pleading we were ushered onto a dock with the strict understanding that we would have to leave early, as soon as it was requested, no hanging about. We agreed.

We docked alongside a superyacht, Mondango 3, at 185 feet long we felt rather insignificant as the crew polished and preened. I wasn’t jealous of them (who wants to clean all day), but I was jealous that once in a while that actually got to sail this amazing beast. We went to check in with the marina office, requesting a pauper’s discount. We did get a great deal so maybe she did feel for us! With the cost came the use of the five star Capella hotel’s facilities. It was too late for a swim so we got changed and headed to the Rum Cave for a pre - dinner cocktail.

Marigot Bay was heaving, being a small place most people were packed into Chateau Mygo, a local restaurant at the end of the dock which caters to all walks of life without putting too much pressure on the wallet. We enjoyed local fare and the hubbub of people on holiday and taking a break from the crewing job.

We took full advantage of the hotel pool the next morning and the very comfortable beds that occupied the surrounding area. We were close to the boat so that we could easily be found for our early departure. However, the yacht that was to take our dock space was obviously working on island time. As we headed back to the boat around 11am the marina staff came along and said that the yacht was on its way in and we had to leave quick sharp. We jumped on and untied the lines. We motored down the channel as the 200 foot superyacht, Sequel P made way to put Mandango 3 in its shade. There’s always someone with something bigger and better than you.