Papagayo was named after a bay situated in Costa Rica, Golfo de Papagayo, meaning The Gulf of the Parrot. On a delivery from La Paz in Baja California to Panama with an identical yacht we encountered a huge storm late at night. Gusts of 55 knots plus and waves at least 30 feet high battered us for most of the night. In the early hours the main sail ripped so we battened down with just a storm jib for the rest of the night until the storm abated. It is something that I wish not to go through again, but in remembrance we decided this is what we should call our yacht.

She is a Choate 40 built by Dencho Marine in Long Beach California in 1981. Designed as an IOR racing yacht (The International Offshore Rule (IOR) was a measurement rule for racing sailboats), she is streamline and flush decked for speed. Her interior although designed with racing in mind is not as bare as other racers, as she has 4 back hammock berths and 4 side cushioned berths aswell as a galley and a large forward area consisting of the heads and storage space. Although there are no cabins she is spacious and comfortable..The yacht meets all international safety standards and comes equipped with all necessary equipment including life jackets, life raft, VHF, GPS and EPIRB. 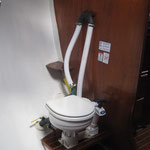 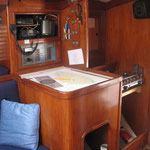 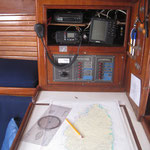 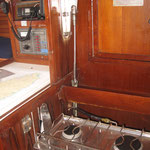 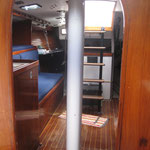 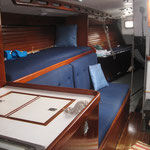 Ben Thompson is a commercially endorsed offshore Yachtmaster and Dive Instructor.He began diving when he was 14 years old and soon found himself at 17 working the summer season in Spain. He has worked all over the world from Asia to Central America, and the USA.He owned and operated a dive centre in Mozambique growing the business from a start up company to selling it as an on going concern. After being on boats of one form or another most his life he decided to concentrate more yacht deliveries and working as a private and charter skipper and yacht instructor.


Vicky Page is a RYA Yachtmaster offshore and a Dive master. She began diving over 23 years ago, working in countries such as Indonesia, Panama and Thailand. Along with Ben she set up and operated a successful dive centre in Mozambique before selling the business and pursuing her interest in sailing. Learning to sail in Southampton, UK she has delivered yachts from the UK to Norway, the US to Bermuda and an Atlantic delivery from Antigua to Mallorca.